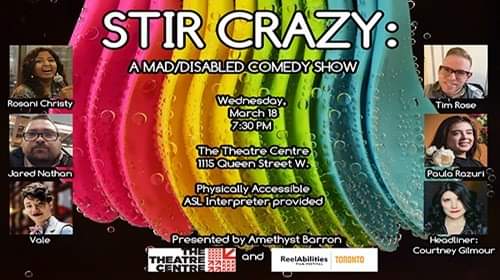 Note: This show is being postponed until a future date in light of COVID-19. The new date will be announced ASAP and any refund requests will be accomodated if the new date doesn’t work for you. Please email amethystbarroncomedy@gmail.com with any questions or concerns.

Save your spoons up to join us for a PWYC ($10-$20 suggested; no one turned away for lack of funds; a portion of ticket sales will be used to hire an ASL interpreter for the next show) and physically accessible evening of laughter. This show celebrates comics who are mad/psychiatrized/crazy and/or disabled!
Presented by Amethyst Barron, The Theatre Centre and the ReelAbilities Film Festival.

Due to interest in this event, be sure to get a ticket to reserve your spot:
https://www.eventbrite.com/e/stir-crazy-a-maddisabled-comedy-show-tickets-95480429535

Amethyst Barron is a nervous wreck who sometimes thinks of something funny. Their unique and witty one-liners tackle big topics like trauma, family, queerness and feminism with a light and calming delivery.

Courtney Gilmour is one of Toronto’s most unique voices and sought after comedy talents, named by NOW Magazine as “one of the top 10 stage artists to watch”. She delivered a breakout performance at the 2017 Just For Laughs Festival in Montreal by winning the Homegrown Comics Competition and filming a set for Kevin Hart’s LOL Network. Courtney’s victory at the 2017 Just For Laughs Homegrown was the first by a female comic in the 19 year history of the event. In 2018 she topped it with televised performances at CBC’s Winnipeg and Halifax comedy festivals, as well as a triumphant return to Montreal to tape a set for The Comedy Network at Just for Laughs. She has made appearances on the CW Network, CBC’s Debaters, and can be seen touring with Yuk Yuk’s comedy clubs across Canada.

?Note from the producer?

There is a gofundme to help cover the costs of ASL interpretation for the next edition of Stir Crazy at www.gofundme.com/f/asl-for-lols

There is one genderless accessible washroom and gendered washrooms that are not accessible.