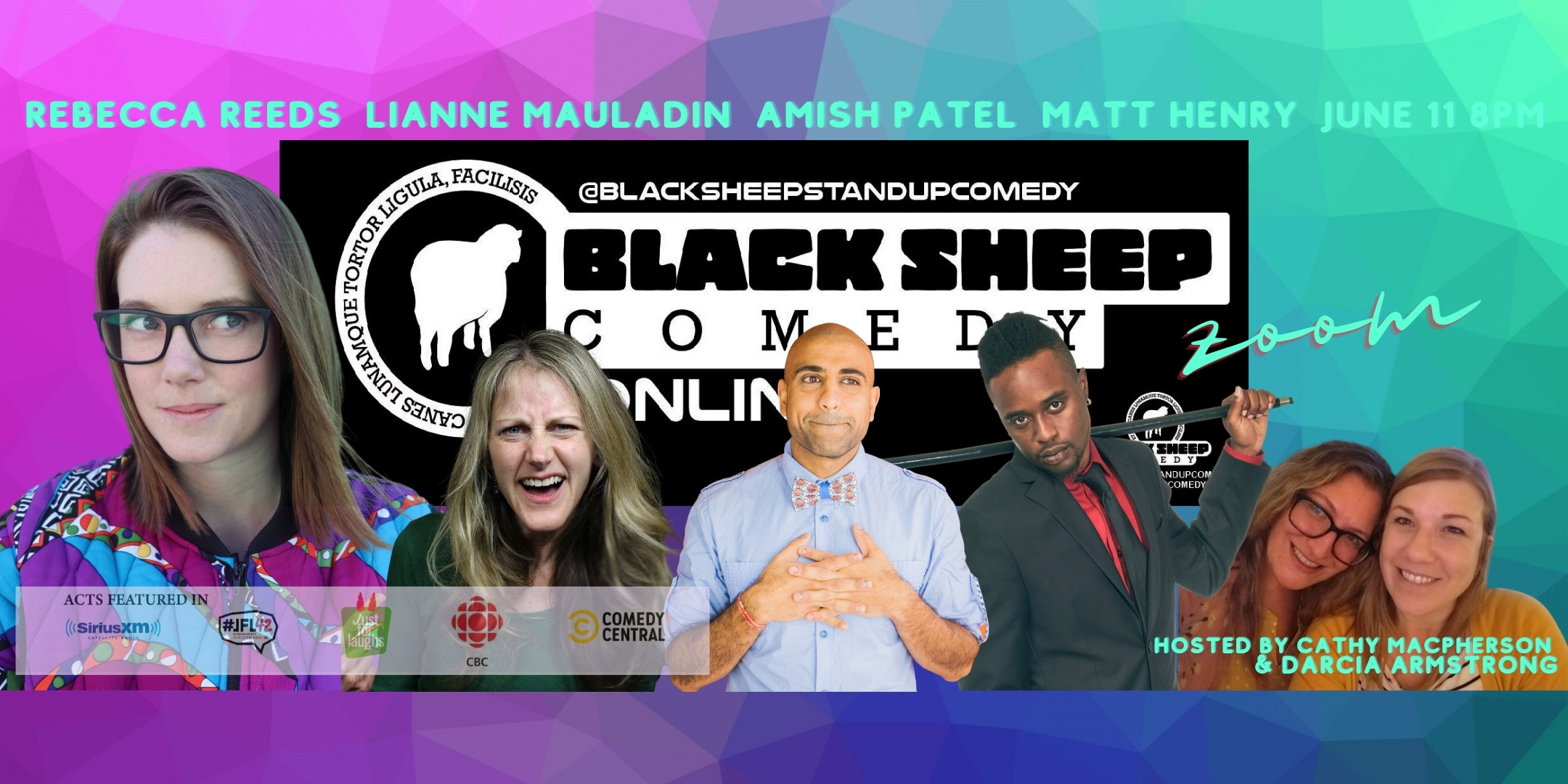 Join us for a stellar night of comedy from you couch! Tickets are donation based, pay what you can to laugh along with this awesome lineup.

Black Sheep Comedy Online is back for another awesome edition of comedy from your couch. We have an incredible lineup of Canadian talent, including your headliner Rebecca Reeds! Featuring Matt Henry, Lianne Mauladin and Amish Patel.
Tickets are donation based so pay what you can (suggested $10 per person or $20 per household) to laugh along with these crazy funny comedians.

Rebecca Reeds is a stand up comedian and writer from small town Ontario. She began performing in Ottawa and has quickly become a comedian to watch out for. She’s performed in the United Kingdom, United States, and all over Canada. She has opened for several distinguished comedians like Beth Stelling, Jim Norton and Tom Green.
Rebecca has appeared on CBC, SiriusXM, and CBC Comedy where her clip was viewed more than 2 million times. In addition to her appearances on radio and television, Rebecca has performed at several festivals across the country including New Faces Just For Laughs, Toronto’s JFL42, Winnipeg Comedy Festival, NXNE, and the Cottage Country Comedy Festival.
In October 2018, The Villain Was Right premiered on the From Superheroes Podcast Network. Along with co-host comedian Craig Fay, Rebecca views movies and TV shows from the villain’s perspective and dares to ask if they were really all that bad. The VWR podcast won Outstanding Debut for a Series and Outstanding Comedy Series at the Canadian Podcast Awards.

The very Canadian, Lianne Mauladin, is known for her comfortable, straight shooting, style of comedy and unique perspective on life.
She’s been killing crowds at comedy clubs and venues across Canada and the USA. She’s performed live on ABC’s “The View” and her comedy has been recorded and or televised on ABC, Bite TV, iChannel, Sirius XM, CBC and Rogers TV.
Her festival appearances include, the Hubcap Comedy Festival in Moncton NB, LOL Comedy festival in Sudbury, the Frigid Festival in NYC, the Out of Bounds Festival in Austin, Texas, the Women in Comedy Festival in Boston, NXNE in Toronto, the SheDot Comedy Festival in Toronto and more.
In 2021 she released her first album “Late for the Party” produced by Cottage Comedy Digital. Mauladin hosts and produces the monthly Merry-Janes of Comedy Show, the longest running all female stand-up showcase in Toronto. The “Merry-Janes of Comedy” road show performs in clubs, halls and theatres around Ontario.

Amish’s life began as a classic fish out of water tale. From a young age he gained perspectives on both Indian and Canadian cultures and learned to deal with discrimination and xenophobia through humour. Amish loved comedy from day one but he still obtained an Aerospace Engineering degree.
After literally becoming a rocket scientist, Amish made up for lost time in comedy by writing and producing his own sketch comedy show called Fade to Brown. He produced sold out shows with crowds of over seven hundred people, gained media attention from NOW Magazine to the CBC, and acquired the funding to executive produce a sketch comedy show for Rogers Television. After Fade to Brown, Amish focused his attention on stand-up comedy and his online presence. Building a loyal online following and racking up hundreds of thousands of views on his comedy videos and becoming the host of Second City’s Diversity night. Not bad for a guy who used to work on jet engines!

Comedian Matt Henry can only be described as different. Since 2005, The Canadian Rasta has been looking to bring his very own brand of individualism to the constantly evolving world of Stand Up Comedy. Whether you need a host for your club, private function, or even a show produced from the ground up; two-time Edinburgh Fringe Festival participant Comedian Matt Henry is committed to putting on the best performance. From London Ontario to London England, Whitby’s Comedian Matt Henry shows no signs of slowing down. Matt has worked alongside some of Canada and North America’s top and unique acts including The Hardcore Legend Mic Folly, The Man of 1000 Voices Michael Winslow, Gilbert Godfried, Darren Frost, Ron Josel, Kenny Robinson and more. It can be a table of six or a theatre of six-thousand, Comedian Matt Henry will always be looking to innovate every time he hits the stage.