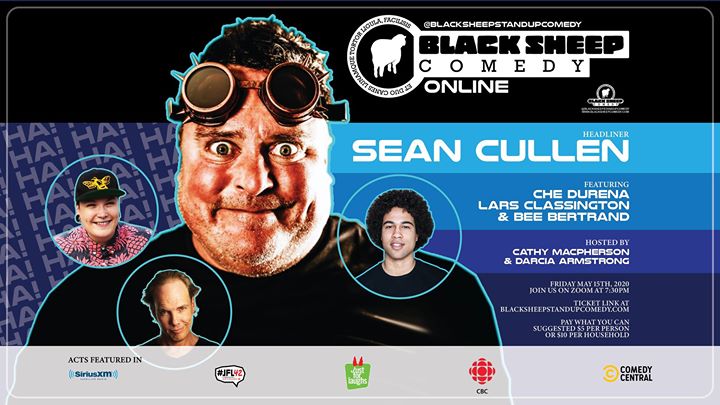 Join Black Sheep Comedy for some hilarious live stand up comedy right from the comfort of your couch!

This is a pay what you can event (suggested $5 per person or $10 per household) so simply reserve your ticket with the amount of your choosing and we’ll send you the Zoom code before the event one hour before the show starts.

Multiple Gemini/Canadian Screen Award/Canadian Comedy Award-winner Sean broke into the business in 1988 as the front man of the seminal musical comedy trio Corky and the Juice Pigs who toured the world. The Juice Pigs were featured on Fox’s MAD TV and released three comedy albums. Sean has been a regular at Just For Laughs, The Halifax Comedy Festival and the Winnipeg Comedy Festival as well as the hit CBC radio show The Debaters.

Cullen has starred in his own television series, The Seán Cullen Show, with appearances on Murdoch Mysteries, Anne: Fire & Fury, Dark Matter, Carter current seasons of Little Dog and Workin’ Moms to name but a few. He was a finalist on NBC’s The Last Comic Standing, and he has appeared on shows such as Ellen, The Tonight Show with Jay Leno, and The Late Late Show. He has a number of comedy specials under his belt including Comedy Central Presents… Seán Cullen and CTV/ The Comedy Network’s Gemini-nominated Sean Cullen’s Wood, Cheese & Children!

He has leant his voice and writing talents to multi-award winning Cloudy with a Chance of Meatballs and Rocket Monkeys, Margaret Atwood’s Wandering Wenda, Jimmy Two-Shoes earning him an ACTRA Award and the upcoming Netflix PEANUTS series The Snoopy Show to name but a few.

Cullen has appeared at the Shakespeare Theatre Festival in Stratford, ON where he starred in A Funny Thing Happened on the Way to the Forum, Peter Pan, and King of Theives and he starred as Max Bialystock in the Canadian Mirvish production of Mel Brooks’ The Producer.

Che Durena was born and raised in British Columbia, He decided to make to jump to Toronto when he discovered his love for stand up comedy.

He came runner up in Sirius XM’S Next Top Comic, he headlined a show at JFL42 and has appeared on JFL All Access on Comedy Central.

His comedy touches on his ridiculous life living abroad and his perception of more serious matters like race, relationship and drugs. Always finding the an absurd angle to creat a fresh a hilarious perspective.

Bee Bertrand is a Toronto based comic who was selected as one of the 2019 New Faces at Just for Laughs Montreal. Bee is one half of Gender Outlaws, co- hosted/co- produced with Alice Rose, which features trans*, non binary, and gender non conforming comics, as well as allies and friends. Bee has opened for Rhea Butcher, and has performed in Shade and Laugh Riot.